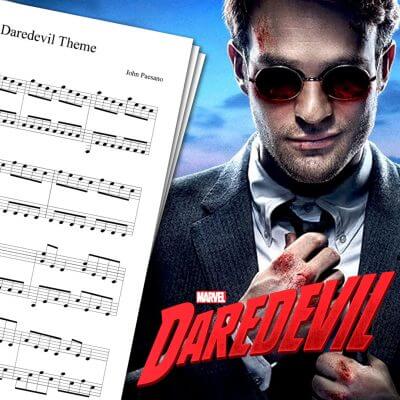 On this page you can download the Daredevil theme sheet music based on my piano cover of the opening theme.

Daredevil’s main theme was composed by John Paesano, and can be heard during the show’s opening. The opening theme remained the same for all of Daredevil’s seasons. Daredevil’s opening theme is my favorite theme of all the recent Marvel television series, Jessica Jones’ opening being second.

The song itself it fairly easy, and beginners shouldn’t have too much trouble playing it!

The two files included in the sheet music are the following:

Released on April 2015 on Netflix, Marvel’s Daredevil is a television series based on the Marvel comics.

Marvel’s Daredevil series is about Matt Murdock, blind lawyer during the day, and hero/vigilante fighting the crime at night. The first season sees Wilson Fisk as the villain, who quickly became one of my favorite bad guys!

Far From Any Road
True Detective