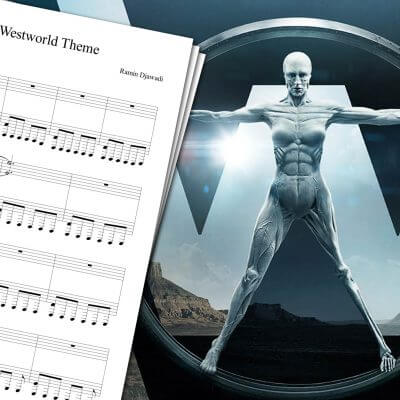 Since Westworld’s first announcement, I was eager to see this series. And I was not disappointed by the show that was supposed to be Game of Thrones’ successor. I loved the series since the first episode, starting with the opening title. To write this Westworld theme sheet music, I used my piano cover that you can watch above.

Apart from the opening theme, I also covered the Dr Ford theme song from Westworld. You can watch my cover and download its sheet music on the Westworld Dr Ford Sheet Music page.

Purchase the Westworld opening sheet music to be able to download the following files:

Westworld is a science fiction television series, first released in October 2016 on HBO. The show is based on the eponymous movie released in 1973.

The series takes place in a fictional western world, populated by man-made androids, where rich customers can go to do whatever they want. Of course, we soon discover that the androids, who are not supposed to be aware their lives are fictional, are slowly starting to remember their past experiences.

Exit Music (For a Film)
Radiohead