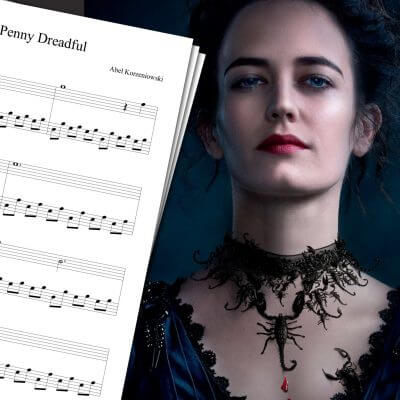 The Penny Dreadful theme sheet music available on this page is based on my piano cover of the opening theme. You can watch it on the video just above!

The song itself is called Demimonde, and was composed by Abel Korzeniowski. You can hear this theme during the opening credits, as well as several times during the show.

While Penny Dreadful has many beautiful songs, I wanted to play the opening theme the most. Apart from the last episode, the opening song remained the same throughout the 3 seasons.

These two files are available for download, once you get the sheet music:

Almost all the characters in Penny Dreadful are inspired by iconic fictional figures, like Dr Frankenstein and its creature, Dracula, Dr Jekyll, Dorian Gray and its mysterious painting, and many more. Vanessa Ives, an enigmatic woman coveted by the devil himself, lays at the heart of all this mess…